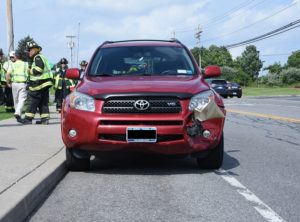 GENESEO – Investigating Geneseo Police Officers determined that a weird twist resulting from a collision with an SUV knocked a Fiat onto its roof late Friday afternoon.

According to Geneseo Police Chief Eric Osganian, the actual collision at about 4:50 p.m. was minor.

“The Fiat was westbound on 20A and the SUV pulled out of Ryan Drive and clipped the Fiat,” said Osganian. “The Fiat spun out of control, hit the curb, and flipped over.”

No one was transported from the scene with injuries.

At the scene, reporters saw minor damage to the SUV’s bumper in the area of the driver’s side headlight and more serious damage to the Fiat’s rear passenger’s side above its wheel.

The Fiat is believed to have been traveling at about 35 mph at the time of the accident.

An air ambulance was called to the scene when the first reports of the accident came in, but that call was soon cancelled.

No criminal activity is believed to have contributed to the crash. 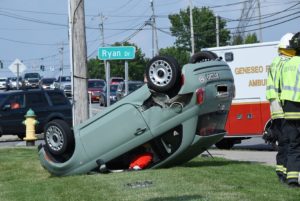