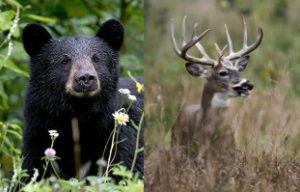 LIVINGSTON COUNTY – The New York State Department of Environmental Conservation (DEC) announced that it will be legal for hunters to shoot bears during the Columbus Day Youth Hunt and shoot antlered deer during the entire bow and muzzleloading season.

The bear and license changes affect all of New York State. The deer season change affects several Wildlife Management Units (WMU’s), including 8H. WMU 8H includes the following parts of central and northern Livingston County: Leicester, Geneseo and Livonia north of Rte. 20A; all of Lima, Caledonia and York; and Pavilion east of Rte. 19 and Rte. 246.