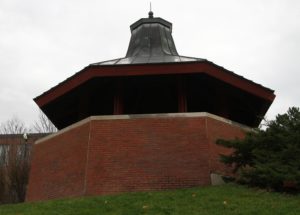 GENESEO – The graffiti found before 8:30 a.m. on Wednesday has provoked another State Police and University Police investigation.

Wednesday morning, a photo of the letters ‘KKK’ written on the side of the gazebo near Sturges Hall circulated social media. SUNY Geneseo President Denise Battles is expected to give a formal statement on the incident.

“University Police at SUNY Geneseo are investigating another case of deeply offensive graffiti on our campus,” said a statement sent by SUNY Geneseo Media Relations Director David Irwin. “President Denise Battles will be communicating with the campus community this afternoon about this incident, and we will forward that message to you promptly. The college urges anyone with knowledge of those involved in any of these flagrant acts to contact University Police at 585-245-5222 or 585-245-5651. We also have a silent witness option that can be used to anonymously report information useful to the investigation.”

The graffiti, believed to be written in mustard, has since been removed.

“Notice how all these KKK signs show up in predominantly liberal areas…” posted Kieran O’Dea. “Your overreaction is driving this phenomenon. Take a deep breath, and realize we don’t live in the 1960s.”

“I’m less inclined to think so with the swastika drawn outside a student’s door, 40+ students who have received texts with hateful content related to race and sexual orientation (number confirmed by an admin as of a few weeks ago), and the fact that white supremacist groups actively exist and recruit locally and throughout western New York (and many, many other places)” replied Jes Heppler.

Some members of the public denounced the drawing as hate speech, but others dismiss it as an attention-grabbing prank.

“Probably just some idiots who think that kind of s*** is funny,” posted Stephanie Newman.

State Police and University Police are also investigating a swastika and the word ‘Trump’ spraypainted inside a residence hall two weeks ago.

“Let us judge our community by how we react collectively,” posted Anders M. Korn.

The gazebo provides one of SUNY Geneseo’s most scenic views of the Genesee Valley. Many people flock there to watch brilliant sunsets or storms rolling in from miles away. 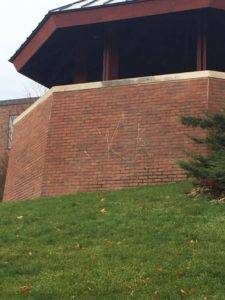