According to a press release from the DEC, the regular deer and bear firearms season is Nov. 18 to Dec. 10. Commissioner Basil Seggos is encouraging hunters to ‘be safe, enjoy the natural beauty of the environment, and consider passing up shots on young bucks.’

“New York has some of the best hunting opportunities in the nation, and our ongoing conservation efforts and hunter safety programs are providing ample opportunities for residents and visitors to enjoy all New York has to offer,” said Seggos. “Deer and bear hunting is also an important tool for New Yorkers to assist our wildlife management efforts and critical for controlling populations especially in areas and habitats where deer overabundance are causing ecological damage. The opening of the Southern Zone regular season is a cherished tradition for many families, drawing friends and relatives together for a weekend afield. I wish all hunters a safe and successful season.”

The DEC says that deer hunting has been changing in New York, with more hunters opting to voluntarily pass up shots at young, small-antlered bucks in favor of letting them grow to be older, larger bucks. The DEC is encouraging hunters to ‘make a difference for the future of the deer herd’ and ‘increase their likelihood of seeing older, larger bucks’ with their campaign, ‘Let Young Bucks Go and Watch Them Grow.’

Following the regular deer and bear seasons in the Southern Zone, late bowhunting and muzzleloading seasons will run from Dec. 11 through Dec. 19. Hunters taking part in these special seasons must possess a hunting license and either bowhunting or muzzleloading privileges. 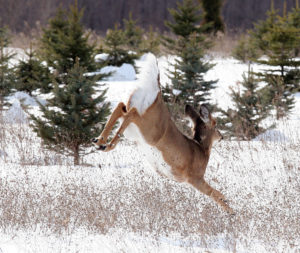