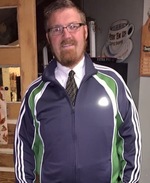 The following is an obituary by W S Davis Funeral Home.

He was born November 6, 1981 in Warsaw a son of Gordon and Karen (nee Elliott) Almeter. He was a 1999 graduate of Letchworth Central School, Gainesville; a graduate of Genesee Community College, Batavia and received his Bachelor’s and Master’s degrees from Geneseo State College.

He was a High School Mathematics teacher for the past eight years at Keshequa Central School in Nunda and had previously taught math with the Genesee Valley Educational Partnership for four years and also taught math in the Rochester City School District. He had coached the high school chess team since 2014, was advisor to the math club and a class advisor, and a former officer of the Keshequa Teachers Association. He would also serve as a tutor when needed. He also worked for Balloons Over Letchworth.

He was a member of the Valley Chapel Methodist Church in Warsaw; was a former Historian for the Town of Eagle; was a coach with the Letchworth Central Cal Ripken Little League. He was an avid pop can/aluminum collector and also collected shelf tractors.

In lieu of flowers, memorials may be made to the family for the establishment of a Ryan Almeter Math Scholarship at Keshequa Central School.