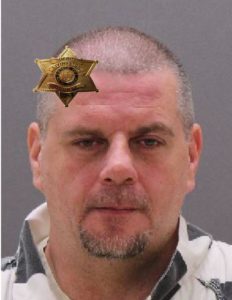 Sheriff Thomas J. Dougherty reports the arrest of a Nunda resident on felony DWI and Aggravated Unlicensed Operation  of a Motor Vehicle charges following an investigation.

On April 29th, 2022 at approximately 11:00pm, Deputy Dylan Bowser was assigned to the Sheriff’s Office STOP DWI Unit when he responded to the Village of Nunda for the report of a traffic complaint.

The vehicle was located and the operator was identified as Christopher S. Naylor, age 41 from Nunda, NY. During the investigation,  the Deputy Sheriff suspected that Naylor was under the influence of an alcoholic beverage. The Deputy Sheriff did attempt to conduct  a DWI investigation which included the performance of standardized field sobriety tests, however Naylor refused to submit to any  field sobriety tests. At the conclusion of the investigation, and based on the totality of the circumstances, Naylor was taken into  custody for DWI.

Naylor was offered a breathalyzer to determine his blood alcohol content (BAC) however, Naylor refused to take the test.

A records check revealed that Naylor had two previous DWI convictions in September of 2012 making this arrest a felony due to the  convictions being within ten years.

Naylor was turned over to Central Booking Deputies at the Livingston County Jail for processing and pre-arraignment detention. The  District Attorney’s Office was contacted in regards to bail due to the felony level charges. It was recommended that Naylor be  released on his own recognizance as the charges do not qualify for bail under the NYS Justice Reform Act.

Assisting on scene for the Sheriff’s Office was Deputy Caleb Nellis.

“When we look at the data of highways being less safe for the motoring public, we must acknowledge that scenarios such as this arrest  exist,” stated Sheriff Dougherty. “We need our elected Judges to be able to legally consider the actions of the accused in respect to  the safety of law abiding citizens and then have the discretion to remand without the possibility of bail, remand with bail set or release, based on such considerations.”