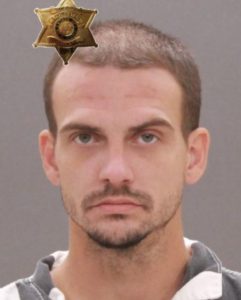 Sheriff Thomas J. Dougherty reports the arrest of a Nunda resident on  felony charges after the investigation of a domestic dispute.

On October 6, 2020, Sheriff’s Deputies responded to an address on Mount Morris – Nunda  Road for a domestic incident.

The investigation alleges that during the incident, 30 year old Cory A. Curry struck a female in  the face causing minor injury. It is further alleged Curry had an active court issued order of  protection in place against him, where the female involved was the protected party.

Curry was arrested and charged with Assault in the 3rd Degree and felony Criminal Contempt  in the 1st Degree.

Curry was turned over to Central Booking Deputies at the Livingston County Jail for  processing and pre-arraignment detention as the offenses did qualify for pre-arraignment  detention under the NYS Justice Reform Act. The District Attorney’s Office was contacted  due to the felony level charge. It was recommended that Curry be held on $5,000 cash or  $10,000 bond.

Handling the investigation for the Sheriff’s Office was Deputy William Cartwirght, Deputy  Jamye Babocsi, and Investigator Brad Schneider under the shift leadership of Sergeant  Joseph Breu.