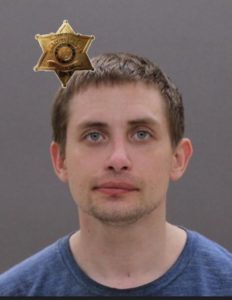 On December 15th, 2020, Deputy Michael Wade was assigned to the Sheriff’s Office Operation Safe Interstate initiative when he stopped a vehicle on Interstate 390 for a violation of the NYS Vehicle and Traffic Law.  The operator of the vehicle was identified with proper identification and a passenger in the vehicle was identified as Matthew C. Isham, age 33 from Nunda, NY. During the stop, the Deputy Sheriff did initiate a roadside drug investigation based upon observations during the stop.

The roadside investigation alleges that Isham was in possession of a quantity of suspected cocaine, which he had attempted to conceal from the Deputy Sheriff. Isham was released on scene, pending the lab results, and the suspected cocaine was sent to a forensic lab for testing.

The operator of the vehicle was issued a uniform traffic ticket for a violation of the NYS Vehicle and Traffic Law and also released.  On March 3rd, 2021 Deputy Michael Wade arrested and charged Isham with Criminal Possession of a Controlled Substance in the Seventh Degree and Tampering with Physical Evidence, as the lab results did return positive for cocaine.

Isham was transported and turned over to Central Booking Deputies at the Livingston County Jail for processing and released on an appearance ticket to return to the Avon Town Court at a later date, as the offenses did not qualify for arraignment under the NYS Justice Reform Act.