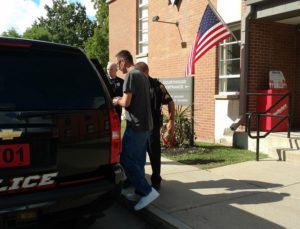 Hassell taken from the courthouse by Nunda Police. (Photo/Conrad Baker)

LIVINGSTON COUNTY — About 30 members of ‘Bikers Against Child Abuse’ attended a Tuesday court appearance for a man to admit to raping two children in Nunda.

“One of the victims is a family member who trusted the defendant and looked up to him as a father figure,” said Assistant District Attorney Justin Hill, who prosecuted the case. “The other victim was a young lady who was lured into the defendant’s home by the defendant with promises of gifts and attention forum the sole purpose of being taken advantage of by the defendant. In my opinion there is nothing worse than the kind of crimes the defendant has committed. There is nothing redeeming about this defendant. He has spent pretty much his whole adult life in trouble with the law and I don’t see that ever changing.”

“As reflected in the PSI, my client suffers from addiction to substances and alcohol addiction,” said Housel. “As the court is aware, this leads to some bad choices. “I sincerely hope that he takes full advantage of any programs he can while incarcerated.”

Housel said that Hassell’s pending Possessing a Sexual Performance by a Child and Endangering the Welfare of a Child charges out of Allegany County are scheduled to be resolved on Friday. Hassell is to be sentenced to a conditional discharge for a misdemeanor offense.

Hill said that the investigation involved in this case was extensive and difficult. Both of the child victims are under age 13.

“These are two very courageous young adults who showed a great deal of courage coming forward,” said Hill. “While the crimes that this defendant committed against them will never really go away I do believe that these two girls are strong enough to put this behind them and move forward with their lives and do great things.”

“This case was successful due to the cooperative efforts of the New York State Police, Nunda Police Department and District Attorney’s Investigator Paul Kelly,” said Hill. “Investigator Kelly worked every day from June until now to talk to witnesses, write search warrants, and work with other police agencies in other counties to build a case which led to a conviction today. Today’s result would have been impossible without his work.”