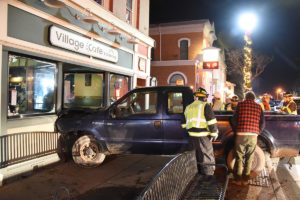 The truck into the front of 70 Main Street. (Photo/Josh Williams)

GENESEO – A pickup truck crashed into the already destroyed bear fountain and then a nearby Main Street building Sunday night.

According to first responders on scene, the truck struck the fountain while headed north on Main Street and veered into the front of 70 Main Street at about 9:01 p.m.

“So we heard a ‘skirt’ and then I see this car kind of stop but kind of turn and then literally just accelerate into Village Cafe,” said Carolien Mossel, 21, who saw the accident from a nearby apartment. “There was a crash and a spin. The guy kind of just stepped out and sat on the bench.”

The bear fountain showed yet more damage on its already ruined south-facing side.

First responders said that the driver was a male in his 50’s. He exited the vehicle on his own and was walking around at the scene.

Though the truck stopped right in the doorway of 70 Main Street, the building sustained minimal damage. Officials are inspecting the building as a precaution.

“I’m just surprised that none of that glass broke,” said Mossel.

The Geneseo Police Department and Geneseo Fire and Ambulance were at the scene immediately.

A tractor trailer struck and ruined the 1888 granite water basin in April 2016, after which the Village installed small reflective strips at its base. The Association for the Preservation of Geneseo is currently working on a full restoration project with Moorland Studios, which Village Mayor Richard Hatheway said is expected to be complete in the summer of 2017. 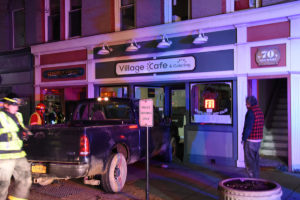 The truck into the front of 70 Main Street. (Photo/Josh Williams) 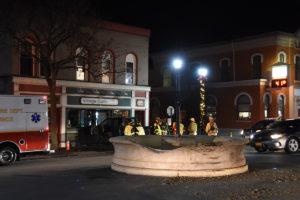 What is left of the bear fountain. (Photo/Josh Williams)