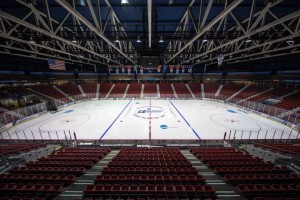 LAKE PLACID — The SUNY Geneseo Ice Knights fell to the Wisconsin-Stevens Point Pointers 5-1 Friday afternoon, ending their season at Herb Brooks Arena in Lake Placid. The Pointers, who are now 23-5-2 on the season and 25-14-3 all-time in the NCAA tournament, advance to the Division III championship game for the ninth time in team history. They are the owners of four national championships, having won in 1989, 1990, 1991 and 1993. They will also advance to their third consecutive national championship game.

The Ice Knights, whose season came to be defined by unwavering resilience following the murder of senior defenseman Matt Hutchinson in January and the loss of sophomore Jason Stephanik to a traumatic head injury in November, finish with a 20-5-6 record. The loss marks the Ice Knights’ second semifinals defeat in the past three years.

Junior forward RJ Burns scored the lone goal for Geneseo with 1:18 left in the second period. Burns finishes the season with eight goals and five assists.

But the Pointers maintained the advantage throughout the game. They finished the first period with an emphatic 3-0 lead following goals from junior Jono Davis, freshman Tanner Karty and senior Drew Graves. They extended their lead to four in the early second period following a goal from junior Elliot Grauer inside the left post. Although Geneseo got on the board with Burns’ shot, another goal by Grauer with 12:26 left in the third period made the score 5-1 and put the game out of reach. Overall the Pointers had 30 shots on goal compared to Geneseo’s 12. First-year goalie Devin McDonald, a third-team all-SUNYAC player, came up with 25 saves for the Ice Knights.

Prior to losing in the semifinals, the Ice Knights played phenomenally well throughout both the SUNYAC and NCAA tournaments. They outscored their previous five opponents 26-5 before heading to Lake Placid. Geneseo’s 20-win 2015-16 campaign marks just the sixth time in team history that the team won 20 or more games, and they made their 2nd NCAA Frozen Four appearance.

Despite the unfavorable result, numerous individuals on the team were honored with awards. Geneseo head coach Chris Schultz was voted the 2016 SUNYAC Coach of the Year for the third time in the last four seasons. Schultz has led the Ice Knights to the postseason eight times in 10 years and has helped the team reach its only two all-time Frozen Four appearances in 2014 and 2016.

Junior forward Stephen Collins, junior forward Trevor Hills and sophomore defenseman Pat Condon were named to All-America teams by the American Hockey Coaches Association. Collins, who was also named a finalist for the 2016 Sid Watson Award as well as given the SUNYAC Herb Hammond Player of the Year award, becomes the sixth player in Geneseo history to make the first team. He finished the season with 22 goals and 25 assists.

Hills made the second team, finishing with 22 goals and 30 points overall. He was voted the SUNYAC Player of the Week on three occasions throughout the season.

Condon finished the year with 17 assists and 21 points, ranking top 10 nationally among all defenseman in points per game.

Wisconsin-Stevens Point will take on the winner of the semifinal between the University of Massachusetts Boston and St. Norbert. That game will be played tomorrow at 7 PM.