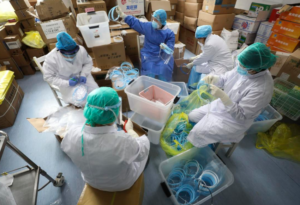 New York City has its first confirmed case of the new coronavirus that has sickened people around the globe, state officials announced Sunday.

The sick person was a woman in her late 30s who contracted the virus while traveling in Iran, Gov. Andrew Cuomo’s office said.

She is currently self-quarantined in her Manhattan home. The woman has respiratory symptoms, “but is not in serious condition and has been in a controlled situation since arriving in New York,” the governor’s office said.

The statement didn’t say when the woman returned to the city after her travels, though a statement from Mayor Bill de Blasio said the travel was recent.

“There is no reason for undue anxiety — the general risk remains low in New York. We are diligently managing this situation and will continue to provide information as it becomes available,” Cuomo said in a statement.

Local health authorities “have been in a state of high alert for weeks, and are fully prepared to respond,” De Blasio said in a statement late Sunday.

People believed to have been in close contact with the woman have already been identified, city Health Commissioner Dr. Oxiris Barbot said.

The test confirming the woman’s illness was done at New York’s Wadsworth Lab in Albany, rather than the U.S. Centers for Disease Control and Prevention. It came just a day after the state lab got federal permission to begin testing for the virus. Previously, tests on New York patients were still being handled only by federal authorities.

More than 80,000 cases of  the illness caused by the virus, have occurred worldwide since the virus emerged in China. About 3,000 people have died. The illness is characterized by fever and coughing and in serious cases shortness of breath or pneumonia.

Rhode Island also confirmed its first case of the illness on Sunday, the same day that researchers said the virus may have been circulating in Washington state for weeks undetected.

Cuomo and other state and city officials had said the emergence of a New York case was considered inevitable, given the city’s role as a hub of international travel.