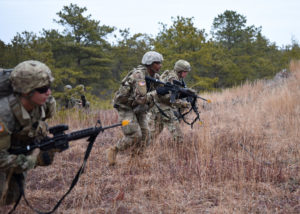 Major General Ray Shields, the Adjutant General for the State of New York, announces the promotion of members of the New York Army National Guard in recognition of their capability for additional responsibility and leadership.

Clifton Betron from Geneseo (zip code 14454), N.Y., and assigned to the Intelligence and Sustain Company, 42nd Infantry Division Headquarters and Headquarters Battalion, received a promotion August 16, 2022 to the rank of chief warrant officer 5.

Jacob Gibson from Nunda (zip code 14517), N.Y., and assigned to the Company C, 427th Brigade Support Battalion, received a promotion September 27, 2022 to the rank of specialist.

Caleb Pruden from Dansville (zip code 14437), N.Y., and assigned to the 222nd Military Police Company, received a promotion October 8, 2022 to the rank of private 1st class.