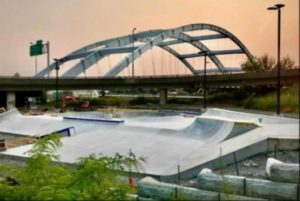 Mayor Lovely A. Warren officially opened the new ROC City Skatepark during a ribbon cutting ceremony. The long-awaited skatepark, located along the Genesee Riverway Trail under the Frederick Douglass-Susan B. Anthony Bridge, just south of the Erie Harbor Promenade, is part of the ROC the Riverway project.

“The opening of ROC City Skatepark brings a new vitality and sense of energy to Downtown Rochester,” said Mayor Warren. “And it also provides a beautifully designed space specifically for skateboarders, rollerbladers, BMXers and other progression-oriented sports enthusiasts to revel in their sport, hone their skills and enjoy endless hours of outdoor recreation along the banks of the Genesee River.

I want to thank the Friends of the ROC City Skatepark, who first introduced this idea to the community, along with all of our partners and funders who helped make it a reality, including the New York State Department of Transportation, RG&E, The Skatepark Project and the Sands Family Foundation. Your commitment and investment in this project have made possible a fun-filled venue that will undoubtedly provide plenty of thrills and excitement for residents and visitors to our city.”

The ROC City Skatepark is a $3.1 million project that includes mini-ramps and ledges, stairs and handrails, competition bowls and a main skate promenade, along with opportunities for public art and performances.

The Skatepark utilizes land that is situated under an interstate bridge and associated off ramps that would have otherwise been unbuildable. The Skatepark is one of several ROC the Riverway projects that are designed to highlight the Genesee River as the centerpiece of Rochester by creating activities and attractions along both banks of this centralized waterway. ROC the Riverway projects are made possible thanks to a $50 million investment from New York State first announced by Governor Andrew M. Cuomo in February 2018.

Empire State Development Acting Commissioner and President & CEO-designate Eric Gertler said, “New York State’s Roc the Riverway investment is working to attract more businesses, families and visitors to Rochester. This long-anticipated skatepark is just one example of the strategic placemaking investments that are revitalizing city centers and fueling economic growth here in the Finger Lakes and around the state.”

The idea of building a public Skatepark was first introduced to City officials in 2008 by the ROC City Skatepark Coalition, the precursor to the Friends of the ROC City Skatepark.  Their vision and commitment to the concept convinced the City to invest funds in the project.  Additional funding was provided through ROC the Riverway monies and an Upstate Revitalization Grant from the New York State Department of Transportation; Commercial Corridor and Main Street Revitalization economic development grants through RG & E; Built to Play and Environmental Impact Grants from The Skatepark Project (formerly the Tony Hawk Foundation); and generous contributions from The Sands Family Foundation and the Friends of the ROC City Skatepark.

“We are very grateful for the support and the partnerships this project has gained over the 12 years that have brought us to this day,” said Michael Riordan, President of the Friends of the ROC City Skatepark. “Now that the first phase of the skatepark is a reality, we are excited to help to activate the space in a way that brings the community together.”

“RG&E continues to see its role as an important strategic partner to the City of Rochester and the Greater Rochester region,” said Joe Rizzo, Manager, Economic Development for RG&E and NYSEG. “Projects like ROC City Skatepark will bring fun, excitement and vibrancy to our downtown corridor and encourage future investments in our region. We are committed to providing grant assistance under our Commercial Corridor/Main Street Revitalization Program for the new Skatepark and want to congratulate the City of Rochester and all our community partners for making this project a reality.”

Construction of the Skatepark began one year ago, in October 2019.  C.P. Ward served as the lead contractor for the project, while Stantec and New Line Skateparks, Inc. provided design consulting services.

Operation of the ROC City Skatepark will be the responsibility of the City’s Department of Recreation and Human Services. The Skatepark will be open 365 days a year. Daily hours of operation will be 8 a.m. – 9 p.m. year round.