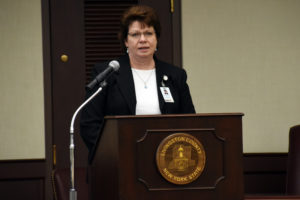 Marcea Clark Tetamore delivering her remarks to the County Board of Supervisors. (Photo/ Josh Williams)

LIVINGSTON COUNTY — Livingston County’s Chief Public Defender told the Board of Supervisors that she anticipates at least a 70 percent increase in case work load as a result of new economic standards to qualify for public defender representation.

According to Marcea Clark Tetamore, Chief Public Defender, in 2015, her office received 1,701 applications for publicly funded legal representation and 1,004 qualified for the office’s services. Under the new qualifying standard all of those cases would have been eligible for free legal services.

“My clients aren’t the kind of person you want your son or daughter to bring home for dinner much less marry, but I truly believe in this system. I believe everyone has the right to make sure their constitutional rights are upheld,” said Clark Tetamore, who was appointed as the Director in 2001. “Which means the police have to the right thing, the District Attorney has to do the right thing, and judges have to do the right thing. I view the attorneys in my office the last stance between the right thing and wrong thing.”

Clark Tetamore stated it is likely for the new standard to take effect in April of 2017. Previously to qualify a person could earn no more then 14,000 dollars. Under the new guideline an applicant would be elidgeable if they make less then 29,700 dollars.

Clark Tetamore spoke to the Board of Supervisors as part of her annual report.