Provo won the election for Mayor in March with an overwhelming 76.44 percent of the vote. Trustees Bishop and Pagano won 31.17 and 29.05 percent respectively in their election, fending off challengers Chad Woodworth and Carl Swanson.

The term for Provo, Bishop, and Pagano officially began April 1, but all three were once again sworn in Monday. All three took the following oath:

‘I do solemnly swear, that I support the Constitution of the United States and the state of New York, and I faithfully discharge the duties of (Mayor/Trustee) of the Village of Mount Morris, according to the best of my ability.’

One of the first duties for the Board will be to figure out how to handle a shortage of about $11,000. A public budget hearing will be held April 10 at the Mount Morris Village boardroom at 6 PM, with adoption of the final budget due May 1. 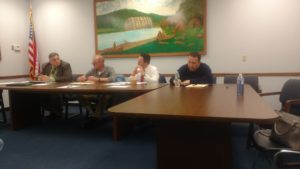