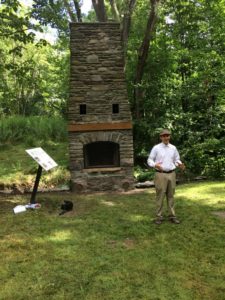 A fully restored chimney at Gibsonville in the park. (Photo/Friends of Letchworth State Park)

LIVINGSTON COUNTY – Letchworth’s stone walls, bridges, picnic tables and shelters are far from crumbling, but about 80 years standing in the rain and ice will wear on anybody.

The Friends of Letchworth State Park, a not-for-profit dedicated to Letchworth, are up to the task. They announced Monday that they secured $28,000 to fix up the Big Bend Camp Chimney, the last remaining sign of a workers’ cabin built in the 1930’s for the ‘Civilian Conservation Corps’ as part of ‘New Deal’ era construction to both put Americans to work and make real improvements to neighborhoods and parks.

“This project is another step in the Friends of Letchworth effort to preserve the CCC Legacy in the Park,” said Carol Rathbun, President of the Friends of Letchworth. “The Friends restored a CCC-built Adirondack-style lean to that sits on the west side of the Genesee Gorge in 2016, a stone chimney at the site of the former CCC Gibsonville Camp in 2017 and restoration of stone picnic tables near the Parade Grounds is now in progress.”

The press release says that there were several CCC participants housed in buildings that have long since vanished, but the chimneys in those buildings for the workers still remain and ‘it has been a mission of the Friends of Letchworth to restore and preserve these jewels of historic significance.’

This particular chimney is on the east side of the park near the Cabin ‘E’ area.

‘The Friends’ have applied for grants like this one through Finger Lakes Regional Economic Development. This most recent $28,000 grant was comes from Environmental Protection Fund Historic Preservation.

The Big Bend Chimney restoration should be completed prior to the National CCC Legacy convention being held in Letchworth, September 2019.

The Friends of Letchworth are dependent on membership dues, fundraising efforts and community donations to raise money to work on the multitude of projects they spearhead in Letchworth State Park. To become a member, visit their website, FriendsOfLetchworth.com call (585)493-3600. 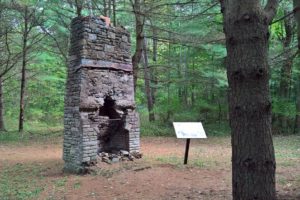