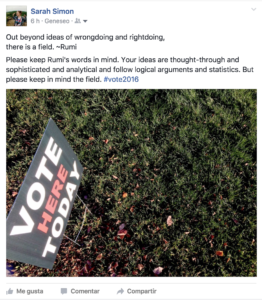 “Are you trying to get in?”

“Yeah, but I’ll just go around. It looks like they want people to enter from the other side.”

Yes, I entered my polling location through a door I wasn’t supposed to use. The wrong door. A janitor in the SUNY Geneseo campus’s Kuhl gym, my polling location for yesterday’s election, the first presidential election I have ever voted in — didn’t want me to have to go around to the designated entrance. To the right door.

And from there it was very welcoming. Hello, good morning, how are you. Thank you for coming in yesterday. Please go to the table for your last name, either A-L or M-Z.

“No you don’t need your ID.” Hands scraped the paper into the folder and held it open to me.

“Just make sure your signature matches the one we have on this paper here.” Hands laid the paper and folder down on the table, open to me. I paused.

What if someone had a knack for forging signatures? Couldn’t anyone vote under anyone else’s name?

I signed anyway. Close the folder over it for privacy. Go ahead to your own little cardboard-shielded cubby. Use the special felt-tip pen to select. Select.

And from there I will not share here. I still cast the shadow from the cardboard over my selection in this year’s presidential election. I won’t share my vote. You can choose to cast the cardboard shadow over your selection, too.

Cap the felt-tip pen. Gather your things. Walk over. As you are walking over, make it apparent to the volunteer that you are ready for the next step.

“Yes I am finished.”

“Please head over to the machine.”

Yes, I attempted to feed my ballot into the wrong side of the machine. The volunteer helped me realize that the feeder was on the other side. My first ballot for a presidential election, redirected to the designated machine-feeding side.

“It should just take it.”

And from there the machine sucked those felt-tip pen picks in. Thank you for coming in today! Here is your sticker. Probably the most visible yet still humble place to stick it is on the collar of your purple button-up. Exit through the designated entrance.

Twenty-one in 2016, and this is the first presidential election I’ve ever voted in. How did the voting go? I entered through the wrong door, I attempted to feed my ballot into the wrong side of the machine. I exited through the entrance.

Later that morning, I wanted to communicate the sense of importance voting brings; now that I had actually done it, with the “I Voted” sticker originally on my purple collar now unwittingly tangling my brown-blond hair – I wanted to share how important the act of voting was. I went to Facebook.

That quote at the top – “Out beyond ideas of wrongdoing and rightdoing, there is a field.” It’s often attributed to the Persian poet Rumi. I first heard it in a TEDTalk about engaging with people you disagree with: “Taking The Other to Lunch.”

The meaning I attribute to the quote is found in what every American who voted did yesterday. Yes, we voted for one person because we think he or she is more ‘right’ than the other, or that the other is more ‘wrong.’ There are many opinions and perspectives that play into these labels, but that’s what yesterday was about: Choosing yours against the other.

I entered and exited the Kuhl gym through the wrong door; maybe you, fellow voter, walked around the building and entered from the right. Maybe you are the doing the rightdoing, and I the wrongdoing. But we both entered the gym, we both entered a field.

I say to you now the words Rumi used to finish his verse: “I’ll meet you there.”