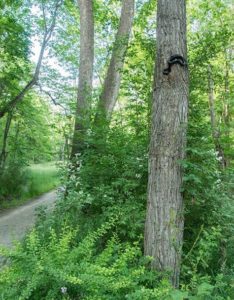 CASTILE – Visitors to Letchworth State Park have been snapping pictures of this black rat snake, who appears to have taken up residence in a tree along the Lee’s Landing Trail.

Park goers have posted multiple photos of the non-venomous, harmless snake going in and out of the tree along the trail.

“Found this awesome rat snake yesterday while walking down to Lees Landing, a first for me,” Christy Librock Hibsch. “I think he may have come out of the hole in the tree that he is half covering up.”

“Wonder if it’s the same snake we saw a few weeks ago while hiking this trail!” posted Shannon Fisher with another photo in the comments. “We could only see part of him and figured he might be enjoying a meal he found in the tree ?”

Fellow Letchworth fans posted their appreciation for the photo, if nothing else because they are now aware that snakes are up in the trees.

“I would die if that fell on my head when hiking!” posted Amy Calmes.

This is the second rat snake at Letchworth to make the rounds on Facebook in the past week. A gigantic specimen was photographed and shared on June 15.

According to the New York State Department of Environmental Conservation, the black rat snake is the longest snake found in NYS, reaching up to six feet in length.

It has black, satiny scales, sometimes with white skin in between, giving it a blotchy appearance.

Black rat snakes are not venomous. They kill mice and rats by wrapping around them and constricting them in their clutches. The DEC says that although the snake is a predominantly woodland creature, it can often be found around barns because of its taste for rodents. 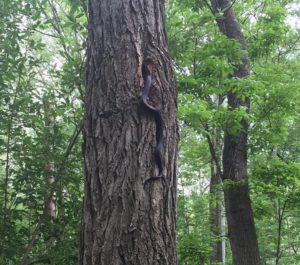 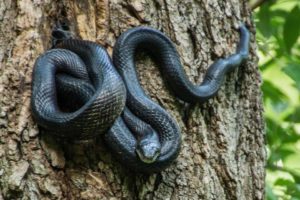