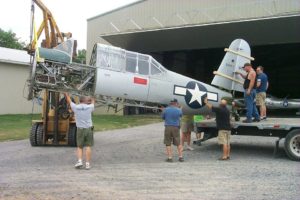 GENESEO – The National Warplane Museum in Geneseo accepted a classic trainer aircraft to its collection on Monday, preserving the legacy of an essential training experience for pilots in World War II.

National Warplane Museum volunteers drove the Vultee BT-13 Valiant to Geneseo on a flatbed from New Garden Airport in Pennsylvania, finally putting her to rest in the Museum’s hangar. The Museum now has in its care 14 historic aircraft, including six of WWII’s workhorse airplanes: the L-16, BT-13, T-6, C-45, C-47, and B-17.

“This expands our collection, makes it more rounded, and lets us show more examples of aircraft from the 1943 period,” said Craig Wadsworth, Director of Aircraft Maintenance at the Museum. “It helps us better tell the story of aviation and aviation history.”

The plane’s previous owner, Jeary Vogt, was most of the way through restoring her when health problems made him decide to donate her to a worthy caretaker. There is work to do to get her in the air, but Wadsworth says that museum volunteers will complete the restoration before long.

“This is very good condition, we hardly ever receive an airplane that is this complete,” said Wadsworth. “There is work to be done, but the work that is to be done is very straightforward. Mostly it’s just replacing paneling, getting rid of surface corrosion and assembly.”

The Valiant was an essential step for untold thousands of trainee pilots in their fast-tracked journey to the cockpits of P-51 Mustangs or C-45 cargo planes. The young men, some of whom had never set foot in an airplane in their lives, went through an intense 53-week training period in a series of planes with increasing complexity and power.

First, trainees would commonly fly the comparatively wimpy 200-horsepower Stearman biplane, which taught bare-bones basics of flight controls so that they could manage a takeoff and landing.

Then the vast majority of trainees stepped into the BT-13. She is truly an entirely different animal, metal framed, with 450 horsepower, more than double that of the Stearman. She has a two-position propeller that allows two engine speeds for maximum power taking off and more efficient engine speed for cruising. Trainees learned basic maneuvers and to compensate for wind conditions, which meant learning more complex instrumentation.

The next stage in training is where prospective pilots’ training diverged. Those destined for fighter squadrons took on the AT-6 trainer to learn aerobatics and dogfighting, and those destined for grueling cargo or bombing missions continued in the C-45 or UC-78, learning to be part of longer flights with larger crews.

“The U.S. Army Air Corps trained in BT-13’s, and many, many allied enlisted men came here or to Canada to train, since we had the advantage of not being occupied or bombed,” said Wadsworth. “The RAF [British Royal Air Force] mostly sent their pilots to Canada. Free French and Poles trained in these.”

The Museum posted to their website that they hope to have the BT-13 finally assembled in 2017. 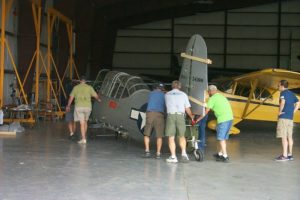 Putting her away in the hangar. (Photo/National Warplane Museum) 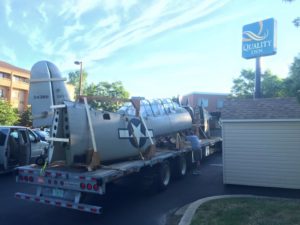 The BT-13 on its way from the Quality Inn to Geneseo. (Photo/National Warplane Museum) 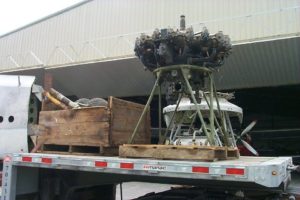 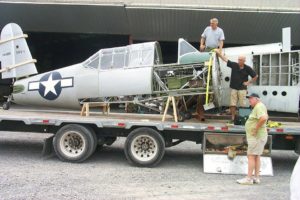 Arriving at the Museum. (Photo/Craig Wadsworth)