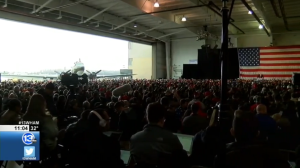 GENESEO – According to National Warplane Museum representatives, there is no political message behind the presence one of their aircrafts at a Rochester hangar during a political rally for Donald Trump.

The National Warplane Museum said that they and their beautifully restored Douglass C-47 , ‘Whiskey 7,’ have no political affiliation with any candidate or party and their plane was outside a JetSmart Aviation hangar in Rochester as part of their ongoing relationship.

“We do business with JetSmart and at the hangar for routine flight tests to open our flying season,” said Dawn Schaible, Media Relations Director for the National Warplane Museum. “We have had no affiliation or contact with Mr. Trump, and that is what we told the crowd as they passed by. The presence of our aircraft at the hangar was for business only and should not be misinterpreted as any political affiliation or endorsement.”

Several aircraft were present outside of the hangar on Sunday for servicing by JetSmart.

The Museum promoted their organization and mission to the crowd as they passed by to get to the rally.

“We are always happy to promote our own mission and tell the story of our nation’s veterans to a large crowd,” said Schaible.