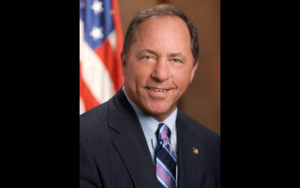 Assemblyman Steve Hawley is celebrating his endorsement and continued partnership with the National Rifle Association (NRA) as he continues his re-election campaign. Hawley, a gun owner himself and a firm believer in the Second Amendment, is proud to continue his relationship with the NRA.

“I am both humbled and honored that the NRA has recognized me for endorsement,” Hawley said. “New York continues to push forward egregious and unnecessarily restrict gun laws, which often times do little but hinder the rights of law-abiding gun owners. Albany needs to understand that gun owners are not second-class citizens, and I will continue my fight to ensure the Second Amendment rights of New Yorkers are protected.”

While widely recognized today as a major political force and America’s foremost defender of Second Amendment rights, the NRA has, since its inception, been the premier firearms education organization in the world. But their successes would not be possible without the tireless efforts and countless hours of service their nearly five million members have given to champion Second Amendment rights and support NRA programs.