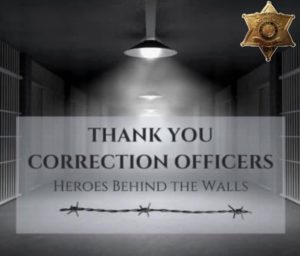 The week of May 2-8 is National Correctional Officers Week. In 1984, President Ronald Reagan issued Proclamation 5187 (see below), declaring the week beginning May 6, 1984, as “National
Correctional Officers Week.” This proclamation, “in recognition of the contributions of correctional officers to our nation,” noted that the position of correctional officer “is essential to the day-to-day operations of these institutions [prisons and jails]; without them it would be impossible to achieve the foremost institutional goals of security and control.”

In the proclamation, President Reagan stated that “the duties of these officers have become increasingly complex and demanding. They are called upon to fill, simultaneously, custodial,
supervisory, and counseling roles. The professionalism, dedication and courage exhibited by these officers throughout the performance of these demanding and often conflicting roles deserve our
utmost respect. The important work of correctional officers often does not receive the recognition from the public it deserves. It is appropriate that we honor the many contributions and accomplishments of these men and women who are a vital component of the field of corrections.”

Livingston County Deputy Sheriffs assigned to the Jail Division are responsible for maintaining custody in a safe, structured and humane manor for up to 194 incarcerated individuals on a daily
basis. The daily responsibilities of a deputy include but are not limited to:
-Safely maintaining housing units and enforcing facility rules through observation and
interaction with the incarcerated population
-Facilitating programs and essential services including recreation, educational and religious
programs, visitation, medical needs, mental health counselling and substance abuse
programs.
-Safe transportation to court and medical appointments.