DANSVILLE – One of New York State’s most prominent and successful advocates for the bald eagle passed away early Wednesday at his home on East Hill in Dansville.

Thomas J. ‘Big Da’ Rauber Sr., 93, was prolifically published on eagles and the story of his quest to save them made it on CNN. Still, some of his proudest work is in the photos and observations he took of the powerful birds.

The following is an obituary posted by Hindle Funeral Home:

Tom was born in Dansville on May 27, 1924, a son of the late Nicholas and Alice (Brooks) Rauber. He was also predeceased by two brothers Peter and Brooks Rauber.

After graduating from Dansville Central School in 1941, he served with General George Patton’s Third Army in Europe during WW II. It was there that pride for his country became ingrained in his heart. His love for the United States of America ultimately led to his dedication to helping save our national symbol, the bald eagle, from the brink of extinction.

Tom has always been interested in nature, and has spent many years hunting, taking photos of wildlife, gardening and studying the American Indian. In 1965, at age 42 while working for Rochester Telephone Company, he discovered the last known bald eagle nest in New York State. He made hundreds of visits to observe and photograph these magnificent birds and witnessed their continuing failure to hatch an egg. He worked closely with the NYS Department of Environmental Conservation, and in 1976, New York became the first state in the nation to implement a comprehensive bald eagle recovery program, under the volunteer guidance of Tom Rauber.

In 1976, the Federation of the NYS Birds Club named Tom Rauber the recipient of the John Elliot Memorial Award for his article, ‘Notes of the NY Nest of the Bald Eagle.’ It was selected as the best submission to their journal, Kingbird. The bald eagle was removed from the Endangered Species List in 2007, and today there are over 300 nesting pairs scattered across the state. In 2013, the NYS Department of Environmental Conservation recognized Tom for his decades of volunteer work and his contribution to the successful restoration of the states bald eagle population.

A lifelong resident of Dansville and parishioner of St. Mary’s Church, Tom is a member of the Daniel Goho Post # 87 of The American Legion. His family, including Mary Ellen, his wife of 69 years, shared his love for the environment as they spent summers exploring the local lakes and visiting several U.S. National Parks. In addition to his work with wildlife, he built and designed homes, a motorized ‘Moose Buggy,’ and worked on the Mt. Morris Dam. In 2015, after more than 37 years of observation and research, he published the book, ‘Bald Eagles Soar Again: One Man’s Quest to Prevent the Extinction of the Bald Eagle in the U.S.’ His work was featured on CNN. His efforts serve as a model for us all, as they demonstrate the significant impact a single individual can have in our world.

Tom and Mary Ellen were very blessed. They spent a beautiful Christmas Day with their entire family this year and for 68 Christmases before. And he was blessed with the wonderful angels who cared for him so he could remain in his home on the hill.

Friends may call Friday from 3 pm to 7 pm at the Foursquare Church, 49 West Ave. Dansville. A Memorial Mass of Christian Burial will be celebrated on Saturday at 1 pm at St. Mary’s Church in Dansville. Arrangements are by the Hindle Funeral Home Inc. 271 Main St. Dansville, Online remembrances may be left at HindeFuneralHome.com. 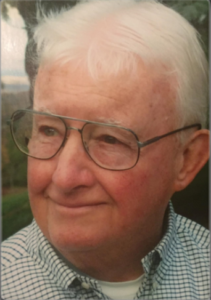