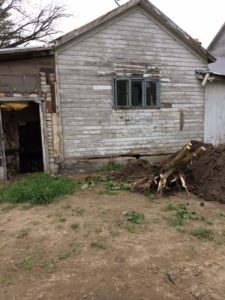 A photo of the Portageville house posted by Paccione. (Photo/Facebook)

NYLON – A startled Facebook user turned to social media for answers when a snake suddenly fell from the rafter of a home they were demolishing near Letchworth State Park.

Facebook profile Debora Anucik Paccione posted a photo of the snake on social media, asking, ‘Did anyone know what type snake this is?? ASAP!!’

“We’re doing demo of a house in Portageville along the Genesee River bordering the Letchworth State Park property. So we know we have them just didn’t think we would have a 6 foot one!,” posted Paccione. “We are digging out foundation and taking down the back room. Snake fell out of rafter with some broken Robin eggs it was probably going after.”

Some commented that the snake could be a rattlesnake and a safety concern for kids or pets.

“If you have pets or children, keep a close watch on them!” posted Brenda Quigley Abrams.

“Milk ?seems to match also, but Triangle head?Rattle?” posted Paccione with another photo of the snake.

However, within two hours, commenters were able to positively identify the animal as a harmless milk snake.

“That’s 100% a milk snake,” posted Brij Harvey. “And that’s a ’round head.’ The ‘triangle head’ of the pit vipers sticks out much farther on each side, making a large and very obvious triangle. Much more pronounced triangle than what you’re seeing here.”

Still, not everyone posted that the snake is a welcome neighbor.

Paccione posted her thanks to the Facebook community for their quick responses and knowledge. 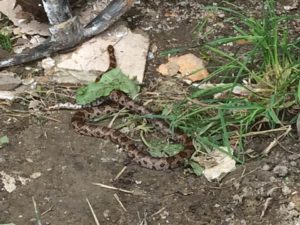 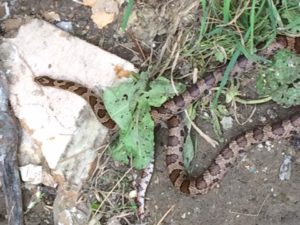