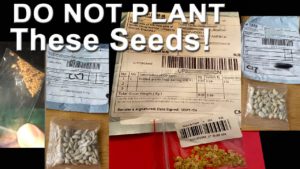 The Livingston County’s Sheriff Office is joining in with other officials throughout our country to not open the packets and report them to his office.  It is being reported that citizens in all 50 states are receiving these unsolicited packets of seeds postmarked from China.

The US Department of Agriculture speculates that the seeds may be just part of a “brushing scam” where the seller posts false customer reviews to boost sales.  A more dangerous theory is that planting the seeds could be a way to introduce invasive species, which can displace or destroy native plants and insects which could severely damage our crops or bring diseases.

In any case all officials are warning not to plant these seeds.

The packages look like standard mail — placed in light grey or beige envelopes. Inside there are sealable plastic bags filled with unidentified seeds of different sizes, shapes and colors.

“Our office has received questions from a few New Yorkers who have received unsolicited packages allegedly sent from China that are marked as containing jewelry (or other items) but which actually contain plant seeds,” Commissioner of Agriculture Richard Ball said in a statement Monday.

The packages “appear to be coming from China,” according to the USDA. However, the Chinese government is denying this is possible.

Anyone who receives the unsolicited packages should immediately contact the Sheriff’s office or the local department of agriculture instructions,” the agency said in a statement.

Officials in New York officials are also asking residents to email the USDA directly at erich.l.glasgow@usda.gov.