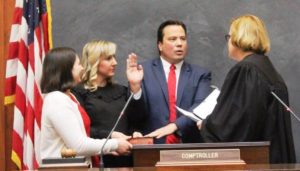 Now that Erie County Comptroller Stefan I. Mychajliw Jr. has asked for a federal investigation of Governor Andrew Cuomo’s decision to send sick seniors stricken with COVID back into nursing homes, the Office of Erie County Comptroller  released a report to the Erie County Legislature today on nursing home deaths in the region.  That report highlights some troubling data about lack of policy and care review in New York State nursing homes compared to other states, and high rates of death due to COVID-19.  Comptroller Mychajliw specifically points to data that shows New York State lagging far behind other states in reporting certain data to the federal government in order to receive federal dollars allocated in the CARES Act.

“The data is alarming,” said Comptroller Mychajliw.  “New York State and Governor Cuomo have done a great disservice to so many families who lost loved ones in nursing homes due to COVID.  What is so troubling is the number of deaths of the most vulnerable of our society in nursing homes.  But it’s also concerning that New York State lags far behind in meeting federal requirements to ensure the state receives federal dollars in the CARES Act.”

The Centers for Medicare and Medicaid Services (CMS) issued a memorandum back in March requiring a Targeted Infection Control survey for nursing homes to inform facilities of infection control priorities during the pandemic and assist them in meeting those priorities.  To incentivize state cooperation with these surveys, millions of dollars were allocated in the CARES Act for states who facilitate completion of these surveys in nursing homes in New York State.

Unfortunately, New York’s completion rate to date is 37.3%, which puts the state in the bottom half of the nation.  To date, nationwide, 54.1% of facilities have completed these surveys, four states have fully complied and another six have completion rates of above 90%.

“New York State and Andrew Cuomo finds itself near the bottom of an undesirable list.  Why has response been so poor?  This, at a time when New York State really can’t afford to lose any federal funding,” said Comptroller Mychajliw.

New York has until July 31, 2020 to have all facilities complete the surveys.  If not, they will be required to submit a remediation plan as to how they will achieve 100% compliance.  If that plan is not executed and completed within 30 days, New York risks losing money from the federal government, which will be redistributed to states in compliance.

According to the Erie County Department of Health, as of June 1, 2020 there have been:

There have been 3,290 nursing home deaths in New York State due to COVID-19.

Additionally, New York, and Erie County specifically, have some of the highest COVID-19 deaths in nursing home nationally.

COVID-19 has had a very significant impact on our region.  If Erie County were a separate country its case fatality rate would rank 14th worldwide.  There are 57.4 deaths per 100,000 Erie County residents due to COVID-19.   Aside from the potential revenue loss during a time when New York State and Erie County face massive revenue shortfalls, by not completing these surveys, facilities may not be implementing necessary procedures to improve the health and safety of the nursing home residents from COVID-19.

“We should be doing everything we can to ensure the health and safety of seniors.  Families neced to know that facilities are following all recommended protocols, and New York needs to follow through with the surveys to ensure we receive much needed federal dollars,” said Comptroller Mychajliw.  “We need to know why the Governor and New York State failed these nursing home residents.”

The Comptroller recommends this data be used as a guide and impetus for lawmakers to explore effective ways for these facilities to combat COVID-19, and for consideration be given to ways to improve the rates of inspection.