To Paul and his wife, Deirdre, Jan. 19 marks five years since their son suddenly passed away, nine days after his 24th birthday. To them, it’s only natural that they do all that they can to hold their community close, cheer their hearts and let everyone know that everything will be alright. Paul, keyboardist for Bob’s Brother’s Band, is returning with the band to the newly restored and reopened Avon Inn Jan. 27 to play in memory of his son and too many other bright Avon kids.

“It’s not just for Blair, but for the people our neighbors miss, the people they love,” said Phillips. “For whatever reason, Avon has lost a lot of kind, bright young people. […] Not to give too much away, but at the end we play Three Little Birds by Bob Marley, saying ‘every little thing gonna be alright.’ You know, life might not be everything we sculpt it to be, but no matter what, you can use the energy you have to help your friends and neighbors along.”

The show, dubbed MusicFest, went on in 2014, 2015 and 2016, taking a one-year hiatus for the renovations to go through at the Avon Inn, where Blair held his first job as a dishwasher. The show runs from 7 p.m. to 11:55 p.m. on Jan. 27. The money raised goes to two places: a scholarship at Avon Central School that Phillips says backs kids who ’embody Blair and how he lived’ and to Avon Community Cares, the grassroots volunteers who help any of their neighbors who need a hand with practical tasks.

Blair’s passion and ability for music, art and architecture took him far from the little hometown he loved. Signing on as an architect in the Washington, D.C. office of Perkins Eastman, an international planning and design firm, he contributed significantly to the design of The Anthem, a 6,000-seat performance hall at The Wharf DC, called ‘Washington’s newest destination,’ which opened in October 2017 as a 3.2 million square foot, $2.5 billion mixed-use development.

In January 2013, he was skiing in Colorado when he swerved to avoid hitting a family that unexpectedly appeared in front of him. He fell hard, but called his parents soon after to let them know he was O.K. After returning home to DC, he suffered a stroke caused by vascular injuries from his fall, and tragically passed away.

Within hours of his passing, Blair’s gift of life through organ donation saved three lives and provided sight to two others. Since he was an organ donor, Donate Life (Finger Lakes Donor Recovery Network) will be at MusicFest to educate the public.

PN Hoffman, project developer for The Wharf DC, named a street at at the development after Blair, Blair Alley SW. He dedicated a fountain to Blair with the inscription, ‘MAY THE MUSIC AND DESIGN OF BLAIR PHILLIPS LIVE ON​.’

Despite their profound loss, Paul and Deirdre choose to carry forward Blair’s legacy by embracing their neighbors, especially those who have also lost children.

“Deirdre and I have tried to set an example, at least in our own lives, that parents can channel grief into life-affirming energy,” said Paul Phillips. “I’m not saying there isn’t sorrow. That never goes away. There’s an emptiness. There are several families in town who have experienced the loss of a child. We’re all part of a club that nobody wants to be in, and we’re all walking this path together.” 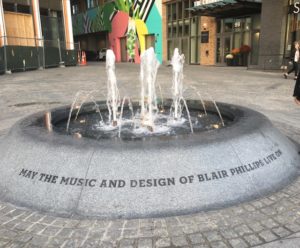 Blair’s fountain at the Whatf. (Photo courtesy of the Phillips family) 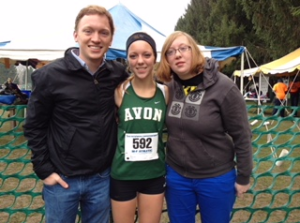 Blair with sisters Anna and Kate. (Photo courtesy of the Phillips family)