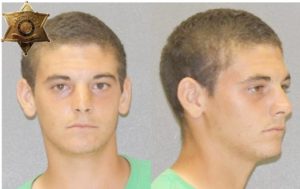 According to a press release from Sheriff Thomas Dougherty, Joshua Liming, 24, was arrested for felony Criminal Mischief in the Second Degree, felony Grand Larceny in the Fourth Degree, two counts of misdemeanor Criminal Trespass and two counts of Petit Larceny.

The Sheriff’s Office’s investigation alleges that Liming had entered into a fenced area at two local businesses in Caledonia, caused over $1,500 of damage to vehicles, stole several car batteries valued of over $2,500, and stole antique farm equipment from a property owner in the Town of Caledonia.

Liming was transported to Central Booking at the Livingston County Jail and is currently held in pre-arraignment detention. Assistant District Attorney Josh Tonra did provide a bail recommendation of $3,000 cash or $6,000 bond.

Liming will be arraigned on Friday.