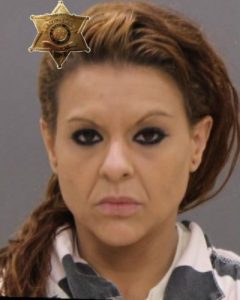 Sheriff Thomas J. Dougherty reports the arrest of a Mount Morris resident on six felony charges following an investigation  by the Sheriff’s Office.

On September 4th, 2021 the Sheriff’s Office responded to a residence in the Town of Livonia for the report of a past resident that had  stolen numerous credit cards and a cell phone from the residence while she was residing there with the homeowner.

It is alleged through the investigation that Denise A. Wolfe, age 38 from Mt. Morris NY, stole six credit cards from the complainant  between late August and early September.

Wolfe was turned over to Central Booking Deputies at the Livingston County Jail for processing and pre-arraignment detention due to  an arrest warrant being signed by Town of Livonia Justice Margaret Linsner. The District Attorney’s Office was contacted in regards  to bail due to the felony level charges and an arrest warrant being issued. It was recommended that Wolfe be released on her own  recognizance due to the offense(s) not qualifying for bail to be set under the NYS Justice Reform Act.