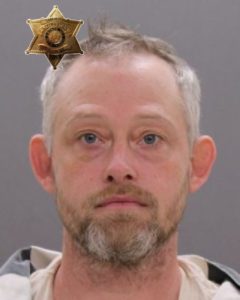 Sheriff Thomas J. Dougherty reports the arrest of a Mount Morris resident on felony charges following an investigation by the Sheriff’s Office.

On December 24th, 2021 at about 6:45pm Sheriff’s Deputies responded to an address on Swanson Road, in the Town of Mount Morris,  for the report of a male that had made verbal threats to residents at their home. The male individual was identified as Brian S. Ayers  Jr, age 41, of Mount Morris, NY. While in the area, Sheriff’s Deputies did locate Ayers operating his vehicle at which point a traffic  stop was attempted, through Ayers failed to comply and a short vehicle pursuit ensued. Deputies did terminate the pursuit shortly after  it began for reasons of public safety.

At about 8:10pm, on the same evening, Sheriff’s Deputies again located Ayers operating his vehicle again on Ridge Road, in the  Town of Mount Morris, and attempted another traffic stop. At this time, Ayers did stop and abruptly exited his vehicle. Ayers is then  alleged to have advanced towards Sheriff’s Deputies in an aggressive and threatening manner, while wielding a hammer and making  verbal threats. Ayers was quickly taken into custody without further incident.

During the roadside investigation it was discovered that Ayers had also been in possession of a Taurus model G3 9mm cal. pistol,  loaded with fifteen rounds of 9mm ammunition, for which Ayers did not have a permit to carry or possess in the State of New York.

Ayers was transported and turned over to Central Booking Deputies at the Livingston County Jail for processing and pre-arraignment  detention. The District Attorney’s Office was contacted in regards to bail due to the felony level charges. It was recommended that  bail be set at $50,000 cash/credit or $100,000 bond.

Assisting with the investigation for the Sheriff’s Office were Deputy Jerry Pilkenton, Deputy Dylan Bowser, and Deputy Michael  Phillips of the Patrol Division and Investigator Josh Monster of the Criminal Investigations Division. The incident was handled under  the command leadership of Sergeant Matthew Thomas.