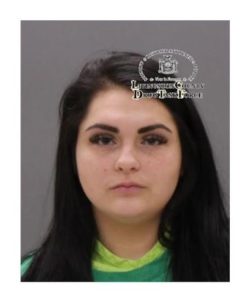 The Livingston County Drug Task Force reports the arrest of a Mount Morris NY resident  following an investigation into cocaine sales in the Village of Geneseo.

Alexis A. Mock, age 20, was arrested on April 2, 2022 by members of the Geneseo Police Department. A Livingston County Superior Court indictment warrant charged Mock with two counts of Criminal Sale of a  Controlled Substance in the Third Degree (class B felonies), and two counts of Criminal Possession of a  Controlled Substance in the Third Degree (also class B felonies). The arrest culminated an investigation into  the sale of cocaine in the Village of Geneseo. The investigation was handled by the Livingston County Drug  Task Force.

Mock was turned over to Central Booking Deputies at the Livingston County Jail for processing and pre arraignment detention. The offenses did qualify for pre-arraignment detention under the NYS Justice Reform  Act; however, a Judge may not set bail and the individual must be released.

If you have information regarding illegal drug activity in or around Livingston County, please call us on our tip  line at 844-LCSO-TIP or online at www.livingstoncounty.us/sheriff under the TIP LINE. You may remain  anonymous.