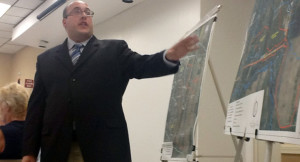 LIVINGSTON COUNTY – Two regional projects by an engineering firm that works closely with several towns in Livingston County were recognized as part of the American Council of Engineering Companies of New York’s 2016 Engineering Excellence Awards.

According to a press release from MRB Group, who frequently work with Geneseo, Avon and Dansville, the Council of Engineering Companies recognized their work on the Village of Dansville’s wastewater treatment plant and Farmington Town Justice Court facility.

The Dansville plant upgrades were designed and managed by MRB Group’s wastewater expert and Project Team Leader Bill Davis. Incorporating a long-term asset management plan, the project was designed to use best practices and cutting-edge technology in operations and energy usage, ensuring maximum efficiency at the lowest cost to Dansville residents. The project received a Platinum Award for Excellence.

The Farmington Town Justice Court Facility was the result of outstanding client collaboration and a focus on meeting municipal staff needs. The project was managed by MRB Group’s Architecture Team led by Scott Bova and incorporates the latest in security and technology to support operations.

Winning projects will be honored at the 49th Annual Engineering Excellence Awards Gala, which will take place at the Waldorf Astoria in New York City on March 19, 2016. This event is co-sponsored by the ACEC New York Scholarship Fund, and in conjunction with the Gala, our scholarship program will award more than $50,000 to NYS engineering students.

Each year, over 60 member firms submit projects that are judged on a rigorous set of criteria, which includes complexity, innovation and value to society. These projects are judged by a panel of industry experts, which includes military and government officials, ACEC National and International leadership, educators from colleges’ and universities’ engineering departments, and leadership from other organizations dedicated to the built environment. Awards are distributed based on the average scores received by these judges, and are assigned one of four levels (in ascending order): Silver, Gold, Platinum, and Diamond. The top-rated Diamond award, designed and built entirely within New York State, will earn the Empire Award, which will be announced during the Gala.

MRB Group works with more than 100 municipalities across the State of New York, and is approaching 90 years of continuous service to local governments since it was formed in 1927.