MOUNT MORRIS – Presenter Scott Fitch showed kids the basics of social media dangers by threatening to identify an audience member and display one of their Instagram or Twitter posts.

According to a press release from Sarah Williams, Secretary to the Superintendent/District Clerk/Wellness Coordinator for Mount Morris Central Schools, Fitch didn’t really show any posts, but he got everyone’s attention.

Fitch went on to explain that social media is real, and everyone needs to ‘Pause Before You Post,’ because what they post can have real consequences.

“When using social media, once you send something you have lost control over it,” said Fitch. “There is a digital footprint for everything that you post, nothing gets deleted.”

That was just a small portion on Fitch’s presentation about social media peril and how the wrong material online can cost kids their dignity, college scholarships or even attendance into their college of choice.

Fitch gave an anecdote about having a college coach several years ago tell him that he was no longer going to recruit one of Fairport’s top players because of something the young man had posted on social media. Fitch also said that Harvard University conducted a social media experiment where they went through a list of accepted students and scoured their social media and if what they found was less than appealing, that student’s acceptance was revoked.

“The presentation was very good and really interesting,” said Simmons, 17, a senior student at Mount Morris. “He talked about real things and real problems, I never knew that there could be such dire consequences for social media posts.”

Though Fitch has presented to schools over 300 times in the last four years, this was Fitch’s first time visiting Mount Morris High School.
A Fairport High School graduate and former NCAA Division III Basketball Player at SUNY Geneseo, Fitch is becoming as well known for his speeches. He has been Fairport’s Varsity Basketball Coach for the past 16 years.

“If there could only be one take away from my presentation today it would be to self-evaluate, be proactive, and to step up when you see something,” said Fitch. “Most of these kids were so nervous at the beginning of my presentation and that carries different angles but what they need to realize is that they control their own image.”

Fitch also spoke about cyberbullying, a topic that he hears much about.

Fitch shared a story about the night he missed a game because the sister of one of his players made an irreversible decision. He never mentioned what happened exactly but it was evident that the young girl took her life. A couple days later, Fitch got online and tried to determine what impacted the girl so much to go down that dark road. What he saw didn’t look that bad to him, Fitch told Mount Morris students.

“But I don’t get to make that decision,” said Fitch. “It doesn’t matter how I define cyberbullying, what matters is the person who is receiving it.”

Mount Morris 7-12 Principal Jesse Hamilton first met Fitch at the Section V Summit and has always been a big fan of Fitch’s presentations.

“This is such a good message for Mount Morris students,” said Hamilton. “Kids really need to think before they post because they don’t always realize the ripple effect of what they are doing.”

Hamilton went on to explain that he witnessed the students being completely engaged the entire presentation. That is presentation was preventative and proactive and that he would love an annual presentation.

Fitch went on to emphasize that social media isn’t all bad.

Fitch marveled at being able to connect in seconds via Twitter with a coach overseas if he needs to know more about a player. He spoke about how students have the power to brand themselves like no generation before them, and use social media to show others the good things they do.

“The feedback I’ve gotten from students and from schools, people having me back multiple times to talk, tells me there’s an impact,” said Fitch. “I really want to impact kids every day, that’s one of my life goals.” 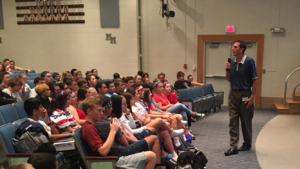