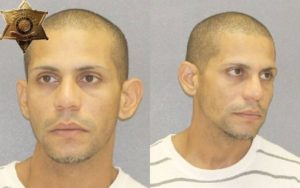 MOUNT MORRIS – The Livingston County Sheriff’s Office arrested a Mount Morris resident after a domestic disturbance during which he allegedly threatened his wife with a knife.

The investigation alleges that Marrero became upset with his wife and two children over household chores and an argument ensued. It is further alleged that Marrero hit his wife in the leg and stomach with a child’s toy, held her against her will when she attempted to leave with the children and threatened her with a knife.

The wife and children were able to sneak out of the house’s back door and went to a relative to call 911.

Marrero was transported to Central Booking at the Livingston County Jail for processing and pre-arraignment detention.

On Sept. 19, Justice Robert Ossont arraigned Marrero and remanded him to the Livingston County Jail without bail set due to past felony convictions.

According to the New York State Department of Corrections and Community Supervision, Marrero has a prior conviction for felony Attempted Rape in the First Degree. He served over 10 years for that conviction and was released in 2012.

The Mount Morris Police Department arrested him for raping a 13 year old girl 2001. He is a level 3 sex offender, at maximum risk to re-offend.

Deputies were assisted on scene by the State Police and Mount Morris Police Department.