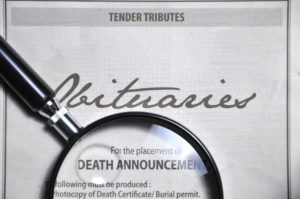 ROBERT THOMPSON age 84 of Mount Morris, died peacefully Monday April 27, 2020 Noyes Memorial Hospital in Dansville, New York.  He was born the son of Stuart and Dora (Rumfelt) Thompson on February 2, 1936 in Nunda, New York.  He served in the Army from 1960 to 1965 during the Vietnam War.  Prior to his retirement he owned and operated Robert Thompson Farm in Mount Morris for nearly 40 years.  He was the Mount Morris Town Supervisor for 3 years and also served on the Livingston County Board of Supervisors.  He was a member of several farm and agriculture associations including the Future Farmers of America

He is survived by his 2 children Darcee A. Thompson and Bret (Karen) Thompson and Grandson Jared all of Florida.  2 brothers Clair (Pam) Thompson of Leicester and Hugh (Barb) Thompson of Nunda.  Many nieces and Nephews.  He was predeceased by his son Tyler in 1969.

No prior calling.  Services at the convenience of the family.  Interment Mount Morris Cemtery.  Memorials may be made to Future Farmers of America (www.ffa.org).  Arrangements by the JOHN W. MARTIN FUNERAL HOME, 37 Chapel Street, (Route 408), Mount Morris.  Sign the online registry at