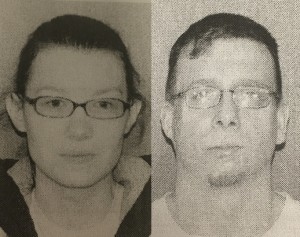 MOUNT MORRIS – The Mount Morris Police Department arrested two people for allegedly locking their 4-year-old in her room for days.

According to the Mount Morris Police Department, Mekial McLean, 27, and Cody McLean, 28, were arrested on Feb. 17 for misdemeanor Endangering the Welfare of a Child.

“Both were cooperative with us,” said Mount Morris Police Officer Melody Gates. “The child was being locked in her room for days, urinating and defacating on the floor, and the parents would clean it up later.”

The investigation by Mount Morris Police suggests that the parents were locking the girl in her room because they believed she was ‘out of control’ and did not know how to handle her behavior.

The alleged victim had also not received proper medical attention.

According to our news partner 13WHAM, Mount Morris Police said that Livingston County Child Protective Services returned both the girl and her nearly two-year-old brother to the parents on Monday.

Both defendants were issued appearance tickets. They will appear in local court at a later date.