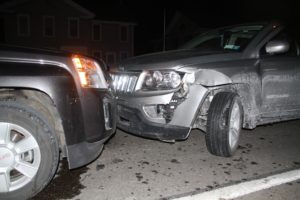 The most severe damage to the vehicles. (Photo/Conrad Baker)

MOUNT MORRIS – One of the drivers in the minor head-on collision on Main Street Monday night left the scene charged with two counts of misdemeanor DWI.

According to Mount Morris Police Chief Ken Mignemi, Barbara Rawleigh-Spencer, 65, of Geneseo, was arrested for two counts of misdemeanor DWI and Unsafe Lane Change, a violation.

“Witnesses allege that Rawleigh-Spencer’s vehicle was northbound in the wrong lane and two cars swerved to avoid her,” said Mignemi. “She hit the third car.”

The cars collided at about 8 p.m. near Hopkins Street.

Firefighters with the Mount Morris Fire Department responded to the scene alongside a Mount Morris ambulance crew.

Both lanes of traffic are now open. 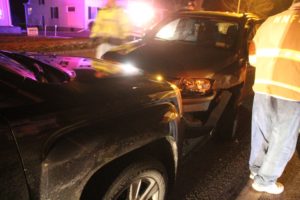