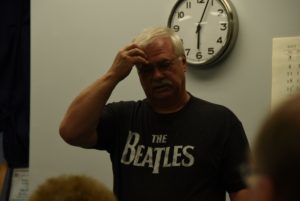 It was Howe who came to the rescue when an apartment building on Trumbull Street caught fire and two people were trapped upstairs. He accepted the award to applause and shouts of ‘good job!’ and ‘speech!’ from the public.

“I heard the fire whistle go off at home and I was headed down to help Rotary, which was setting up in front of the bank,” said Howe in a brief speech. “So I came down Chapel Street and turned the corner onto Clinton, stopped at the intersection and I said ‘boy that’s a hell of a fire, that baby’s cookin.’ Then I see a head pop out of the second floor window through the smoke. And then he was gone and then he came back. So I said ‘well we got to get him out of there.'”

Howe had to break through a tent that was in his way to set up the ladder and let the first trapped man climb down.

“I heard trucks coming, I heard sirens, so I pulled into the old bank parking lot, took the ladder off the truck, and there was a tent, probably 10 by 20, up against the building and I yelled to people to move the tent but nothing happened so I just kind of slammed the ladder up against the tent until it collapsed and I put the ladder up to this guy,” said Howe. “He came out of the building and came down the ladder and he said there’s someone out front too. Of course at that point the flames are licking right out of the side of the building. So I got the second guy out of there and he says ‘I’m OK, I just couldn’t get down the stairs.'”

Howe says he then simply went on his way to go set up for Rotary. He then came back to check on the scene but by that point both rescued men had left.

“It was like four days later that I made contact with them,” said Howe. “He was quite a ball of emotion. But like I say, I’m not a limelight person, so…”

After his speech Howe quietly took his seat and watched the rest of the board meeting.

The plaque reads: ‘The Mount Morris Village Board recognizes Tim Howe for the courage and bravery he exemplified rescuing residents from a burning building on June 10, 2017. Your entire community is proud of you.’ 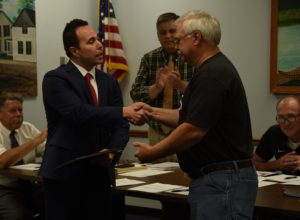