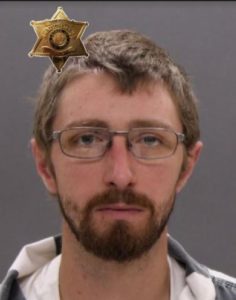 Sheriff Thomas J. Dougherty reports the arrest of an Ossian resident on felony DWI and AUO charges following an  investigation into a motor vehicle crash involving a motorcycle.

On August 21st, 2021 at approximately 6:30pm, Sheriff’s Deputies and emergency personnel responded to Ossian Hill Road, in the  Town of Ossian, for the report of a motor vehicle crash involving one motorcycle.

The on-scene investigation revealed that Justin R. Hubbard, age 32 from Ossian NY, was operating a motorcycle northbound on  Ossian Hill Road when he lost control of the bike, causing him to leave the roadway and strike an earth embankment.  The investigating Deputy Sheriff suspected that Hubbard was under the influence of alcohol and responded to Noyes Memorial  Hospital in Dansville to conduct a DWI investigation. Hubbard did submit a blood sample to test for BAC (blood alcohol content).  The blood sample was sent to a forensic lab for testing.

Hubbard was transported by ambulance with minor injuries resulting from the crash. There were no other injuries as a result.  The lab results revealed that Hubbard’s BAC was .17%.

A records check revealed that Hubbard did have a previous conviction for DWI within the past ten (10) years. It was also revealed that  Hubbard’s driving privileges in NYS had been revoked due to a previous DWI related offense.

On October 2, 2021 Deputy Michael Telesca arrested Hubbard and charged him with felony Driving While Intoxicated and felony  Aggravated Unlicensed Operation in the First Degree, in addition to violations of the NYS Vehicle and Traffic Law.

Hubbard was turned over to Central Booking Deputies at the Livingston County Jail for processing and pre-arraignment detention as  the offenses did qualify for arraignment under the NYS Justice Reform Act, however, the Judge cannot set bail.

Assisting with the investigation on scene for the Sheriff’s Office was Deputy Michael Donals of the Forensic Identification Unit  (FIU).