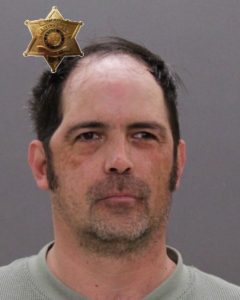 On February 9, 2021 at about 6:30pm, Sheriff’s Deputies and emergency personnel responded to the Genesee Valley Plaza in the Town of Geneseo for the report of a motor vehicle crash involving two vehicles.  The investigation revealed that a vehicle being operated by Thomas E. Morey Jr, age 46 of Lima NY, was traveling north through the main entrance of Genesee Valley Plaza when he failed to stop for a stop sign, causing a collision with another vehicle that was traveling east through the intersection.
There were minor injuries reported as a result of the crash.

During the investigation, Sheriff’s Deputies suspected that Morey was under the influence of drugs.  Deputy Andrew Merring did conduct a DWAI Drug investigation which included the performance of standardized field sobriety tests. At the conclusion of the investigation on scene, Morey was taken into custody for Driving While Ability Impaired by drugs.  Morey was also found to be in possession of suspected concentrated cannabis.

Morey was transported to the Sheriff’s Office substation in Lakeville where Deputy Michael Phillips, who is a certified Drug Recognition Expert (DRE), conducted an evaluation. It was the Deputy’s expert opinion that Morey was under the influence of cannabis and that he could not operate a vehicle in a safe manner. Morey was provided a urine sample which was submitted for forensic testing.

Morey was arrested and charged with Driving While Ability Impaired by Drugs, and Criminal Possession of a Controlled Substance in the Seventh Degree.  Morey was turned over the Central Booking Deputies at the Livingston County Jail for processing and released on appearance tickets as the offenses did not qualify for pre-arraignment detention under
the NYS Justice Reform Act. Morey was provided a future court date for the Town of Geneseo Court and Deputies did set him free.

Assisting with the investigation on scene for the Sheriff’s Office were Deputy Michael Donals of the STOP DWI Unit and Deputy Jerry Pilkenton of the Forensic Identification Unit (FIU), under the command leadership of Patrol Sergeant Matthew Thomas.