AVON – Police kept finding more cocaine on two people after a traffic stop, resulting in more felony charges on the road and at jail.

According to a press release from Livingston County Sheriff Thomas Dougherty, Stephanie Forrester, 34, of Bliss, NY, was arrested for misdemeanor Aggravated Unlicensed Operation of a Motor Vehicle in the Second Degree, misdemeanor Criminal Possession of a Controlled Substance in the Seventh Degree, and later with felony Tampering with Physical Evidence.

Richard Brown III, 28, of Mount Morris, was arrested for misdemeanor Criminal Possession of a Controlled Substance in the Seventh Degree and later with felony Promoting Prison Contraband in the First Degree.

On Feb. 5, Deputy Shawn Whitford was assigned to the Sheriff’s Operation Safe Interstate initiative on Interstate 390 when he stopped a vehicle for an alleged violation of the New York State Vehicle and Traffic Law.

Forrester was found to be driving the vehicle with a revoked NYS driver’s license for failing to submit to a prior chemical test. Forrester was taken into custody. Deputies alleged that Forrester and a passenger in the vehicle, Brown, possessed cocaine. Both Forrester and Brown were charged with possession of a controlled substance.

Deputies believed that Forrester was still concealing something once she was in custody. Forrester was found to be in possession of two more bags of cocaine and was charged with tampering. Both Forrester and Brown were transported and turned over to Central Booking Deputies at the Livingston County Jail for processing and pre-arraignment detention.

The arresting Deputy alerted staff at the jail of the drug possession and that he believed they were concealing more drugs. A further search of the suspects in the jail led to the discovery of Brown being in possession of five more bags of cocaine and two bags of heroin. Brown was charged with two more counts of possession and promoting prison contraband.

Assisting with the investigation were Deputy Jerry Pilkenton from the Road Patrol Division and Deputy Ken Hall from the Jail Division.

The District Attorney’s Office was contacted for bail recommendations. The recommendation for Forrester was $10,000 cash or $20,000 bond and for Brown to be held without bail due to his prior felony convictions. 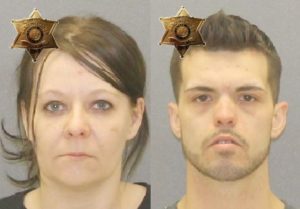