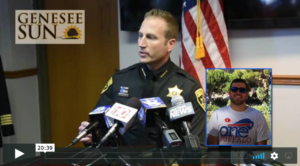 Livingston County Sheriff Thomas J. Dougherty reports the arrest of a Monroe County resident on felony DWI charges after a traffic stop. On June 30, 2020 at approximately 6:50 pm, Deputy Chad Eaton was assigned to the Sheriff’s Office Operation Safe Interstate initiative when he stopped a vehicle on Interstate 390 for a violation of the NYS Vehicle and Traffic Law. The operator of the vehicle was identified  the driver as 29 year old  resident  of Spencerprort,  The Deputy Sheriff suspected that Giardino was under the influence of alcohol and conducted a DWI investigation.

The Deputy Sheriff offered a set of standardized field sobriety tests to David R. Giardino, however, Giardino refused to do them. Giardino was also offered a breathalyzer to test his blood alcohol content (BAC), but Giardino refused to take that as well. At the conclusion of the roadside investigation, Giardino was arrested and charged with Driving While Intoxicated and violations of the Vehicle and Traffic Law.

It was also discovered that Giardino was in possession of an open container of alcohol in the vehicle as well as marijuana. The DWI charge was a felony as Giardino has a previous DWI related conviction in 2012. The marijuana was secured as evidence and will be sent to a forensic lab for testing, future charges will be pending the lab results.

Giardino was turned over to Central Booking Deputies at the Livingston County Jail for processing and pre-arraignment detention. Under the NYS Justice Reform Act, the charges qualified for arraignment as the Judge can impose driving restrictions; however, the Judge cannot set bail