WAYLAND – A Wayland teen last seen in the Village of Dansville is now missing.

On Feb. 19 at approximately 9:28 a.m., the New York State Troopers from the Wayland barracks received a report that Miller was missing.

She was last seen wearing a blue Buffalo Bills sweatshirt, unknown color leggings, black sneakers and she was carrying a white duffel bag.

She has family that resides in the city of Binghamton. 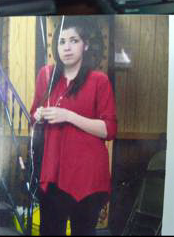