OSSIAN – The teen that was missing for nearly all of Tuesday is located.

Dansville Police Chief Charlie Perkins said that the search for Evan Sinsebox, 15, was unusual and concerning. Searchers covered over 100 houses with foot patrols and a bloodhound before letting up the search for the night.

“It’s just odd and concerning that no family members saw or heard anything of him all day,” said Perkins. “He’s old enough to take care of himself. In these situations number one we want the subject to be safe and number two we want to give the parents comfort.”

The teen was seen asleep inside a garage early Tuesday morning by a local resident, who called police to have the teen checked for medical problems. At no time was the teen thought to be in immediate physical danger.

“Talking to his friends, we felt comfortable that he would surface within the next few hours,” said Perkins. “But he did not, and that was concerning. We found a small amount of blood, and when I say small I mean four drops the size of a quarter.”

About 20 officers total from the Dansville Police Department, New York State Police and Livingston County Sheriff’s Office participated in the search. They covered well over 100 houses with a State Police bloodhound and foot patrols from all agencies.

Perkins determined that the use of a drone or helicopter would not have been useful because Sinsebox was most likely in a building. Perkins said that the community was extremely helpful during the search.

“I can’t say enough about this community or how much they really wanted this guy found,” said Perkins. “You didn’t even have to finish the sentence ‘do you mind if we take a look around for this missing person.’ They just said ‘yes go right ahead,’ sometimes multiple times. It was great to see.” 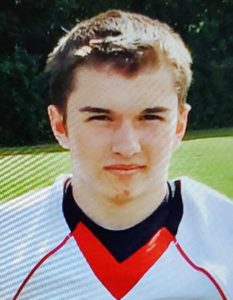