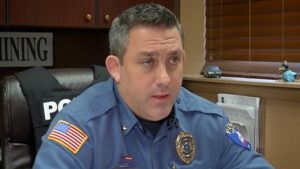 MOUNT MORRIS – Police Chief Ken Mignemi is suspended for two weeks without pay for intervening in the roadside DWI investigation of a Nunda Town Councilmember.

Mignemi said that he looks forward to returning to his position on Oct. 3.

“I will be glad to have this behind me,” said Mignemi, “and I look forward to getting back to work and serving the Village of Mount Morris as their Chief of Police.”

Nunda Town Councilman James Forrester was driving in the Village of Mount Morris the night of Aug. 19 when he was pulled over for an alleged Inadequate Headlamp violation by a Mount Morris Police Officer;

The officer allegedly observed signs that Forrester was intoxicated and had him perform field sobriety tests, after which they took Forrester into custody;

The officer announced over the air that they were transporting one subject in custody;

The officer then released Forrester with no charges filed.

Mount Morris Mayor Joel Mike placed Mignemi on administrative leave on Sept 8. Mike announced on Sept. 21 that he was suspending Mignemi without pay from Sept. 19 to Oct. 3.

The GeneseeSun.com made two requests under the Freedom Of Information Law  to the Village of Mount Morris to obtain any official reports pertaining to this incident. The first was denied because the incident was under investigation.

Continue to follow the GeneseeSun.com as the results of the second FOIL request become available.