WEST SPARTA – Three men are in custody on high-level drug felonies following two drug busts in the Town of West Sparta, at least one of which was at the Boneyard auto salvage.

According to a press release from Sheriff Thomas Dougherty, arrested were: Kenneth Hoag, 55, of Dansville; Kurt Redance, 26, of West Sparta; and Andrew Culliton, 37, of West Seneca.

Friday night, April 21, local residents noticed heavy law enforcement presence at the Boneyard on Dansville Mount Morris Road. Dougherty confirmed Saturday morning that ‘there were active police investigations last night’ and that ‘there is no cause for public alarm.’

The three men were turned over to central booking Deputies at the Livingston County Jail for processing and are being held in pre-arraignment detention to be arraigned at a later date.

More charges are expected and more information will be released Monday. 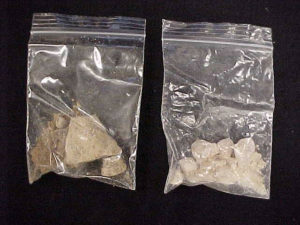 Methamphetamine. Not alleged to be associated with Friday’s search warrants. (Photo/tsbxbby via Flickr.com)