LIVINGSTON COUNTY – A drug overdose at Geneseo’s fire hall on Memorial Day is just the latest in a long-term rise in drug overdoses in and around Geneseo.

Geneseo Fire and Ambulance Chief Andrew Chanler said that before the Memorial Day parade on Monday, a man suddenly drove up to the fire hall seeking medical attention for his male passenger, who was unresponsive.

“He realized something wasn’t right with his friend and sought medical help,” said Chanler. The ambulance crew recognized signs of an overdose and successfully administered Narcan. “We transported the patient to Noyes with a County paramedic on our ambulance.”

Geneseo Police Chief Eric Osganian said that on May 26, officers found a woman while investigating an unrelated call at the Highlands on Meadow Drive.

“She was breathing. Unresponsive, but breathing,” said Osganian. “I just don’t know if she stayed there with no help of things would have turned out worse. We believe that the overdose was due to pills.”

Narcan, or Naloxone, a powerful anti-opioid overdose medication, has been used numerous times by local police, the Sheriff’s Office and ambulances to revive overdosing patients since first responder agencies began carrying the drug starting in about 2014.

“We are handling more of these types of calls compared to 5 or 10 years ago,” said Osganian. “We started carrying Narcan a little over two years ago. We have successfully used Narcan on multiple occasions since then.”

Overdoses are on the rise county-wide.

Narcan and training for its use is not limited to first responders. Free citizen training and instructions are available.

Still, more is being done to prevent overdoses from ever occurring.

About a year ago, Sheriff Thomas Dougherty and DA Greg McCaffrey sat down with the GeneseeSun.com and identified specific policies that they take to counter the opioid epidemic, particularly heroin.

The Heroin Education, Resisting Opiates (HERO) program brings the difficult imagery and pain of opioid abuse to local high school kids. The first such program was in Dansville in 2016. The program included an EMS mock call where students heard the symptoms and treatment of an overdose victim, a speech from an incarcerated inmate whose choice of using heroin or opiates landed them in jail, presentations from family victims who have lost loved ones from heroin deaths, recovering addict interviews, education resources such as warning signs and who to turn to and ends with a powerful presentation of an actual overdose of a subject from Livingston County including his life story and real scene photos. The program will be continued in other Livingston County Schools. 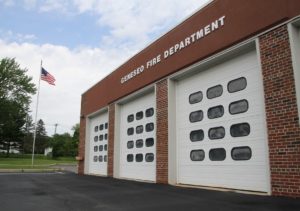