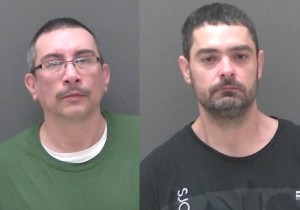 AVON – The Livingston County Sheriff’s Office arrested two Medina residents on felony charges after they were charged with misdemeanors and apparently tried to hoodwink the police.

According to a press release from Sheriff Thomas Dougherty, the driver, Ronald Bonk, 35, was first arrested for misdemeanor Aggravated Unlicensed Operation in the Second Degree, Violation of an Ignition Interlock Restriction, Unlicensed Operator and an equipment violation, and then rearrested for felony Forgery. The passenger, Michael Dunn, 38, was first arrested for misdemeanor Criminal Possession of a Controlled Substance in the Seventh Degree and then rearrested for felony Promoting Prison Contraband in the First Degree and misdemeanor Criminal Possession of a Hypodermic Instrument.

On March 18 at about 5:30 p.m., Sheriff’s Deputy Brandan Flickner of the Livingston County STOP DWI Unit conducted a traffic stop on Interstate 390 in the Town of Avon for an equipment violation.

Bonk was transported to the Livingston County Jail to be held for arraignment on his misdemeanor charges. Bonk was arraigned in Avon Town Court on March 19 before Judge Piampiano and held on $1,500 cash or $3,000 bond.

Bonk was transferred back to the Livingston County Jail and was booked into the system. During booking, ‘Harvey’ Bonk’s fingerprints matched from LiveScan with someone named Ronald E. Bonk, 35, and had used a false name on the arrest.

Bonk was arraigned on the felony charge and held without possibility of bail.

Dunn was transported to the Livingston County Jail for the charge of criminal possession of a controlled substance in the seventh degree to await arraignment.

While Dunn was being processed by Deputy Kyle Gilg at the Livingston County Jail, he was found to be in possession of a hypodermic needle and a crack pipe.

Dunn was arraigned on all of his charges on March 19 in Avon Town Court before Judge Piampaino. He was held on $1,500 cash or $3,000 bond on the drug possession charge out of Avon and another $1,500 cash or $3,000 bond on the Felony in the Village of Geneseo for the contraband charge, as per the recommendation of Livingston County District Attorney Greg McCaffrey’s Office.