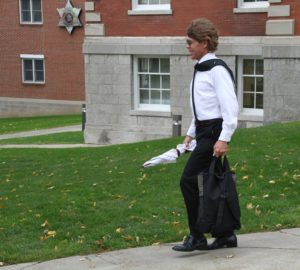 LIVINGSTON COUNTY – Conflicting medical opinions are likely to be a critical issue in the impending manslaughter trial for Tracy Abbott.

Speaking at a Thursday morning court appearance for Abbott, 53, to schedule the jury trial, Livingston County District Attorney Greg McCaffrey said that his office will be contacting doctors to testify.

“We will be speaking to toxicologists and doctors to see if there are any issues with that date,” said McCaffrey. After the appearance, he clarified that doctors called by his office and defense attorney Larry Kasperek will likely have differences in medical opinion.

On Sept. 29, 2014, Abbott’s pickup truck crashed through the wall of a Dansville home, striking four-month-old Calin Fly, who was in a swing in the living room. Critically injured, Fly passed away in Strong Memorial Hospital on Oct. 4, 2014.

Fly was known to be battling pneumonia, and possibly be facing open-heart surgery before the incident. A fundraising page, called ‘Calin’s Crusaders,’ was set up in the aftermath of the accident. The page raised $15,570 towards its $50,000 goal but is no longer accepting donations.

Abbott is known to suffer from seizures. The allegations against him are that he drove while knowing that he had a medical condition that occasionally caused him to have seizures.

A Grand Jury indicted Abbott for one crime: Manslaughter in the Second Degree, for recklessly causing death.

Abbott has had his case continually adjourned over the past two years. Earlier, the court moved his trial date from February 2016. 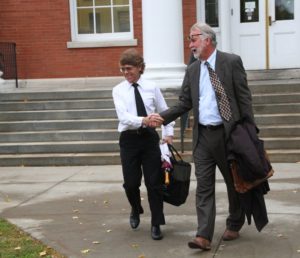